Moving from Carbonite to Dropbox

Moving from Carbonite to Dropbox

I’ve been a happy Carbonite for years. Boom. Done. 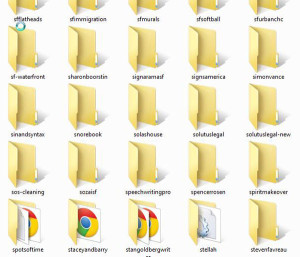 Where will I put all of these folders? Dropbox.

Dropbox is just too easy, too simple, too likeable. I have my files everywhere if I want them. I can choose not to have some on this computer, but have some on others. I can share some folders with some people, others not. I’m a relatively new Mac user and I still can’t really figure out what iPhoto is doing with all of my photos, but the other day I had zero space left on my MacBook Air. Like none, like things weren’t even working. Hmm. Oh yes, I see, there are 10,000+ photos and over 100 gigabytes of photos of my … boys and dog. Yes, I need to weed out a few, ahem, duplicates, but mostly I don’t want all that on one computer anyway. I want them everywhere all the time.

Dropbox now does everything Carbonite does … and more.

Carbonite was a simple backup service. It does a great job. But now that Dropbox offers 1,000 gigabytes for $99/year, I just don’t need Carbonite to back up what’s already backed up. I suppose I could keep it as the backup of the backup, but I have it backed up locally here and there. I don’t know, maybe it’s worth another year. One big complaint is that it seems to slow down the computer it runs on.

Just today, as I was moving things around, Carbonite came up with a warning that I didn’t understand. Something if I didn’t restore files from the backup (or was it back up files from the restore … ) I would lose something within 30 days. Whatever it was about, I didn’t like the idea that I might lose files. What’s the big deal? Files are here, files are there, sync away, and I delete what I don’t want wherever I want. Not restore this and back up that. It’s just the file, they’re there or they’re not there.

Dropbox is just uber simple and it’s what’s going to work for me for the time being. Well, it’s doing more then working, it’s helping, saving, protecting, backing up and restoring.